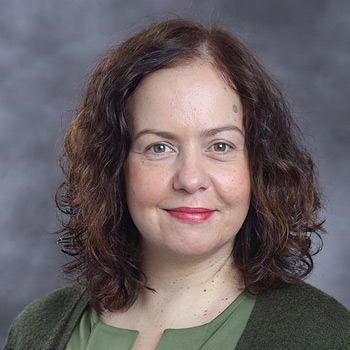 Maria Georgopoulos is currently Director of the Bereavement Services Department at Calvary Hospital. She is responsible for 32 bereavement support groups in the Bronx, Brooklyn and Manhattan that serve hundreds of adults, children and teenagers each year; leads a team of 7 bereavement counselors, all of whom have Master’s Degrees or the equivalent; and spearheads Calvary’s efforts to expand the Hospital’s professional learning programs in the New York area.

Prior to Calvary, Ms. Georgopoulos worked in the mental health profession in other settings including The American Red Cross of Greater New York as a Caseworker after 9/11, at The Jewish Board of Family and Children’s Services as a Case Manager and as Program Director with NHS during her time living in New Orleans. Her professional certifications include a Fellow in Thanatology with The Association for Death Education and Counseling (2005) and she is a Level I Sensorimotor Psychotherapy practitioner. She has also been a member of ADEC’s credentialing committee and is currently a member of the National Alliance for Grieving Children’s marketing and development committee.

Ms. Georgopoulos has participated in various professional teaching activities. These include the Annual Bereavement Course with Calvary Hospital and as Adjunct Faculty with The College of New Rochelle teaching courses in Mental Health Counseling such as Group Counseling and Mental Health Counseling Internship Practicum. She has also lectured at ADEC’s annual conference and co-authored an HFA publication.

In addition to her work in bereavement, Ms. Georgopoulos is also a licensed mental health counselor with a private practice in NYC and provides counseling for diverse populations of people with varying difficulties.

Ms. Georgopoulos graduated from New York University’s Steinhardt School of Culture, Education and Human Development with a Master’s in Mental Health Counseling and received her Bachelor’s degree from St. John’s University with a major in psychology. She also received additional clinical training through The Institute for Contemporary Psychotherapy’s Psychoanalytic Training program and The Sensorimotor Psychotherapy Institute. Ms. Georgopoulos is bilingual and fluent in Greek.