Bronx Resident Honored for Her Excellence as a Nurse

BRONX, NEW YORK, September 2018 – Calvary Hospital recently honored Shawn Boyd, RN, with the DAISY Award for the first half of 2018. Nurses recognized with this biannual award must demonstrate excellence through clinical expertise as well as extraordinary, compassionate care. Honorees are also expected to go above and beyond to make a difference, and exemplify a “healing touch” presence with patients and their families. Award recipients are chosen by their co-workers, administrators, peers, physicians, patients and families.

Shawn began working at Calvary Hospital in 2007 as a Licensed Practical Nurse. After she received a Bachelor of Science degree in Nursing from Helene Fuld College of Nursing in 2008, Shawn began working as a Registered Professional Nurse. As a recipient of the DAISY Award, Shawn received numerous nominations from colleagues as well as from family members. The nominations included comments such as:

During her spare time, Shawn enjoys cooking and enjoying different types of outdoor activities. She is one of three family members who work in the nursing profession. Shawn resides in Bronx, with her family.

DAISY (www.daisyfoundation.org) is an acronym for Diseases Attacking the Immune System. The foundation was formed in January, 2000, by the family of J. Patrick Barnes who died at age 33 of complications related to Idiopathic Thrombocytopenic Purpura (ITP). Patrick really liked Cinnabons at the end of his life and always made sure there was enough of this culinary treat for all the nurses in his unit. As a result, all DAISY honorees are treated with Cinnabons to share with her/his colleagues at every presentation. Each hospital also receives a special banner to hang in the recipient’s unit as a way to celebrate the DAISY Award honors and the nursing profession.

To date, 700 health care facilities (U.S., Canada, Middle East, and Germany, etc.) now give out DAISY awards to honor excellence on their nursing staff. The organization’s main goals are: 1) to pay tribute to nurses who make such an enormous difference in the lives of people they touch every single day; 2) fund grants for nurses who do research and evidence-based practices in the field of cancer; and 3) to give out the DAISY faculty award to inspiring teachers in nursing school. 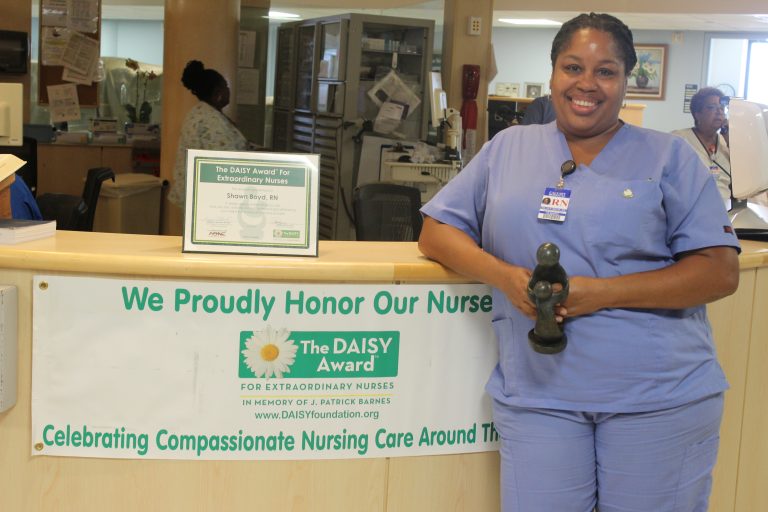