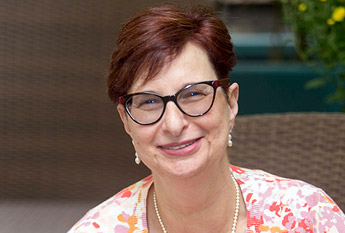 “There isn’t a day that goes by that I don’t feel honored to work with patients and their families at such an intimate time in their lives. Most people I have cared for and worked with have a special place in my heart.”

Q: When and why did you want to become a social worker?

A: I didn’t find my calling as a social worker until I was in my mid-thirties. When my two sons were in school full-time, I decided to go to college myself. I started as a mental health major at Kingsborough Community College. At Adelphi University, I earned my Bachelor and Master’s degrees in Social Work.

Q: How did you get to Calvary? In what capacity have you worked for us?

A: I grew up in the Bronx and I would often pass Calvary Hospital. Once I learned of the population Calvary specialized in, I was fascinated.

It was my opinion that Americans looked at death as a failure instead of a stage of life that we all must go through. I also felt that it was unfair for anybody to die alone or in pain.

I was always an advocate for those who were underserved, so I thought I would like to continue my advocacy as a social worker and help educate others on a peaceful death. I started my career at Calvary Hospice 2002; it was my first job out of social work school. In 2011, I moved to Calvary’s Brooklyn Campus.

Q: What is your personal experience with hospice care?

A: In 2010, my mother-in-law, Marcia, became ill. At that time hospice was discussed and she chose to stay at home and receive Calvary Hospice services there. She died in April 2010. Unfortunately, my mother Ilse, also needed Calvary’s services just 10 months later. She preferred Calvary Hospital in the Bronx. She died in February 2011. Both women received top-notch care. It made me more proud to be connected to such a wonderful, caring organization.

Q: How has working as a social worker with this population affected you?

A: There isn’t a day that goes by that I don’t feel honored to work with patients and their families at such an intimate time in their lives. Most people I have cared for and worked with have a special place in my heart.

Q: Share an anecdote about a former patient and/or family member.

A: While I was still a home hospice social worker, I had a patient in Sheepshead Bay. He became my Brooklyn historian. He shared pictures of what the area looked like before it was so built up. He knew the evolution of the neighborhood. He taught me a lot and I continue to run into his family when I’m in the area, which I always like.

Q: What are some of the rewards and challenges in being a social worker?

A: I think because of my comfort level discussing end of life issues, many people have shared that they are so surprised that I continue to be very upbeat. I enjoy laughing and listening to life stories that are shared with me. I have learned so much from so many patients.

Q: Describe what CalvaryCare® means to you.

A: CalvaryCare® means compassion and understanding. Being helpful and empathetic and continuing to carry out the Calvary mission.